TAKING IN THE SENATE In the nation's capitol on unrelated business, I had a chance earlier this weekend to watch part of the rare Saturday Senate session, including the vote to cut off debate on the Iraq war resolution. (Photos by Willow Lawson.) 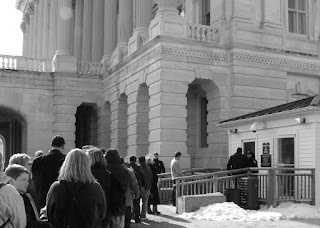 It was a striking scene. Freshmen Sen. James Webb (D-VA) and Sen. Sherrod Brown (D-OH) were nearly alone in the chamber with Sen. Ted Kennedy (D-MA) and Sen. Robert Byrd (D-VA) as the latter two men wound the debate toward its close.

But soon Democrats were converging on the floor--Sen. Jon Tester (D-MT) greeted Sen. Mark Pryor (D-AR) with a slap on the back; Sen. Barbara Boxer (D-CA) flew through the doors wearing what looked like a ski parka; and Sen. Hillary Clinton greeted several senators as she moved through the room, eventually parking herself near Webb. 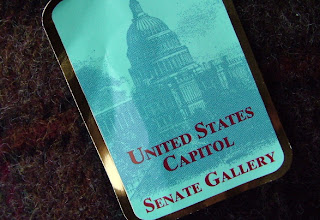 Within a few minutes, nearly all the Democratic seats were filled, even as all but a handful of Republicans remained out of sight. The left side of the room reverberated with smiles and friendly, if hushed, conversations.

Having never seen the Senate in action before, I can't offer an explanation for the lopsided turnout in minutes preceding the vote. But it seems at least plausible that it was a conscious effort on the part of Democrats.

A show of unity? An effort to underscore the importance of the vote? Or a not-so-subtle demonstration to their colleagues across the aisle that they have no qualms about working on Saturdays?

In any event, it was heartening to see all the Democrats in one place, and it was encouraging to see them all getting along famously.

CONTRAPOSITIVE is edited by Dan Aibel. Dan's a playwright. He lives in New York City.