HAPPY FOURTH We take you to THE KNITTING MACHINE by Dave Cole, installed at Mass MoCA through July 7. Photos by Willow Lawson. 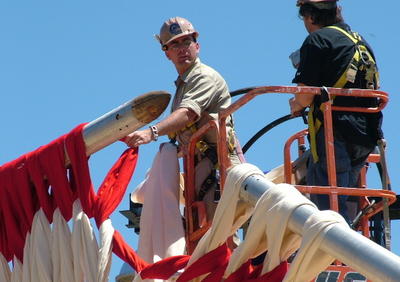 On the most American of holiday weekends, MASS MoCA presents a truly monumental and uniquely American sculptural installation by Dave Cole. Starting June 30, 2005, Cole will be in residence at MASS MoCA with his project The Knitting Machine which comprises two excavators specially fitted with massive 20' knitting needles. The product of The Knitting Machine is an oversized American flag--a flag which can be seen as both a celebratory gesture of pride and a commentary on America's role in world affairs. 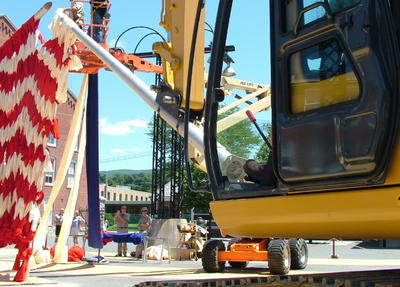 When the flag is removed from The Knitting Machine it will be folded into the traditional flag triangle and will be on display in a presentation case in MASS MoCA's lobby, accompanied by the 20' knitting needles, and a video of the knitting process. 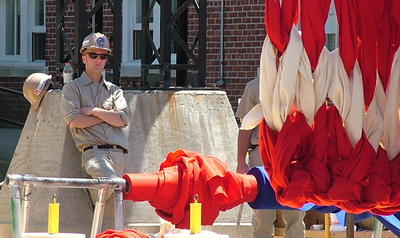 The Knitting Machine is one part of a three-part exhibition of Cole's work at the museum. In addition to the installation, MASS MoCA will show Cole's Memorial Flag (Toy Soldiers) (2005), a 5 ' x 9-1/2' foot flag crafted of 18,000 plastic toy soldiers wrestling beneath an impermeable glaze of red, white and blue; and The Evolution of the Knitting Needle Through Modern Warfare (2001), a convincing display of hypothetical army-issue knitting needles--what Cole imagines Army needles would have been had the Army mandated them as combat equipment for seven wars, from the Civil War through the first Persian Gulf War. 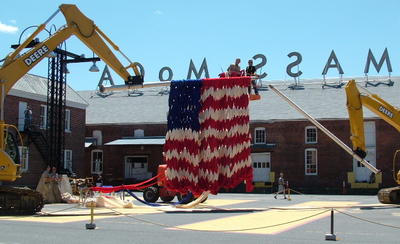 Cole's exhibition is part of American Traditions, a Berkshire County-wide celebration of more than two centuries of the unique and diverse artistic bounty that only America could produce. The John Deere excavators for the installation were donated by Schmidt Equipment in North Oxford, Massachusetts.

CONTRAPOSITIVE is edited by Dan Aibel. Dan's a playwright. He lives in New York City.